First and foremost, that wasn’t a charge on Kevin Durant.  That WAS a foul on LeBron James.  The referees were inconsistent.  But that’s not why the Thunder lost last night.  They lost because for some reason, they forget how to play basketball in the first quarter of NBA Finals games.  It’s the reverse LeBron.  Granted he came up with a big shot in the 4th last night.  Despite how shitty their first half was, the Thunder still had a shot at the end of the game.  I’d have prefered them to hold for last shot, win or go home scenario, but they decided to go quick (and KD was fouled, it wasn’t called) and try to score.  Didn’t happen. Game ends on free throws.  LBJ showed up again in the Finals, Wade was meh.  He was runnin’ like a guy with a hip injury in that 4th quarter.  MVP of this game goes to Shane “Bank Shot” Battier.  I think that guy just hit ANOTHER 3 pointer.  If I’m the Thunder, I can take losing because of LBJ and Wade, but when these other guys start scoring shit, you’ve gotta clamp down.  Oh and in the battle of horrible coaching, Scotty Brooks, congrats on your LVP award.  I was shouting for the last 8 minutes of the game to have a line up of Ibaka, KD, Westbrook, Harden, and Sefalosha.  That is your best defensive line up and when Fisher isn’t hitting the open 3, Thabo is just as good as an option.  He made the switch to that lineup with about 3 minutes to go, and the Thunder roared back. I have ZERO coaching experience and I knew to do that.  For the most part the stars have shown up.  Harden and Wade much better games, Westbrook and KD still solid, James again with a career high Finals game (clutch shot and 12-12 free throws).  If the Thunder realize they need to start playing at tip off and not in the 2nd quarter, they have a good shot at this.  Either way it looks like this thing is gonna be a good tight series.  Get your popcorn folks.

This was probably an offensive foul on Ibaka. Yep, the officiating is horrible. Call it like you see it zebras! Just be consistent! Don’t ruin this shit David Stern!

Tonight marks the start of Game 1 of the NBA Finals between the Oklahoma City Thunder and the Miami Heat.  It’s definitely the match-up that most (not me, I hate the Heat) wanted to see.  We have 4 legit Superstars in LeBron James, Kevin Durant, Russell Westbrook, and Dywane Wade, and 2 Stars in Chris Bosh and James Harden.  In OKC,you have the best crowd in all of the NBA (sorry Sacramento and Golden State fans).  In Miami, you have perhaps the worst fans, front-runners who show up to games late (even Lakers fans know to show up to playoff games early).  Both teams were built differently but yield similar results.  Two young exciting teams with “Big 3” cores.  The Heat built up through free agency while the Thunder were forged through the NBA Draft.  So now it’s time for my breakdown and prediction (sure to be wrong) for the NBA World Championship (even though it’s only played in North America?).

Well after all of that, I have a 3-3 tie with the 7th factor being a tie.  Does that mean this is going to 7 games?  Maybe.  My heart wants to pick the Thunder, because I actually like their team.  My gut says the Heat will win because I hate them and that’s the kind of year I’m having.  I don’t think it goes 7.  I think whoever wins it gets it done in 6 games.  I’m rooting for the Thunder, they represent all that is right in the NBA (except for the whole moving the team from Seattle thing…sorry Sonics fans).  Let’s hope the build up was worth it and this series delivers. Yep, you read all that right, I didn’t actually pick a winner because it can go either way.  Legacies will be cemented after this Finals, are you gonna be a Michael Jordan, or are you gonna be a Karl Malone?  Durant vs. LeBron…err I mean Thunder vs. Heat, tonight is the night (is the night, is the night). 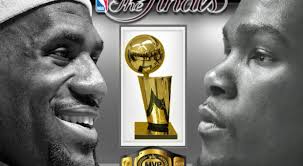 LeBron got the MVP. Will Durant get the Championship?

(Yes I’ve linked this before, but seriously, how does this shit not get you hyped up.  John Tesh, please sell this song to ESPN!!)

Error: Twitter did not respond. Please wait a few minutes and refresh this page.