Everybody is doin ’em right.  I figured I’d drop a few awesome things I plan on doing but I really know won’t end up happening because planning things for a whole year in advance never works out…right?  Your resolutions are probably something like:

Those are just a few of your stupid resolutions.  Now let’s get to my AWESOME ones:

I think I can at least do 2 of the things on my list which would mean my New Year would be 40% successful aka much like most of your high school grades in basic sciences.  Hip hop (anonymous) dancing king crown here I come! 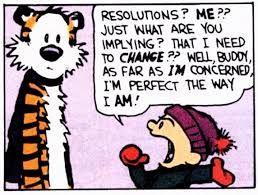 Damn I miss Calvin and Hobbes…and for the record I agree with Calvin!

Error: Twitter did not respond. Please wait a few minutes and refresh this page.